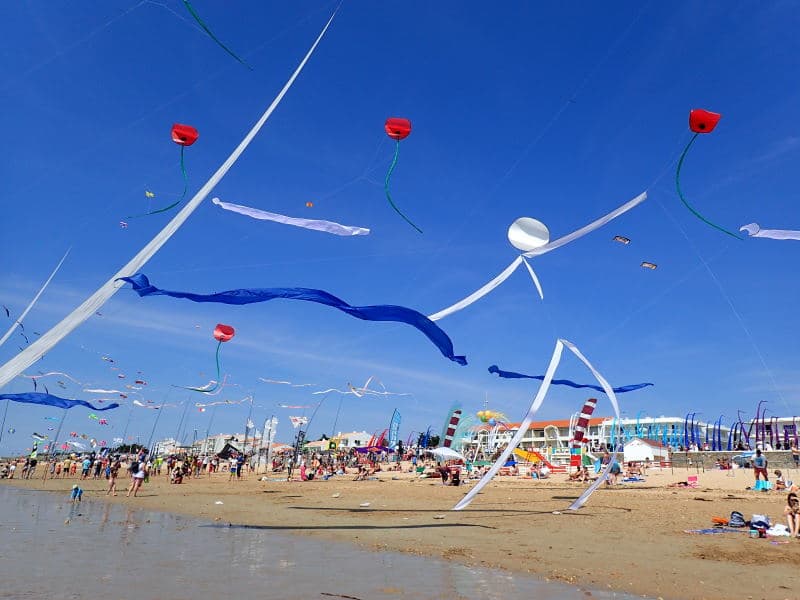 Airy and balanced, this year at the great kite festival A Tout Vent, the sky was filled with hundreds of shapes and colors. Derek Kuhn and Roger Tesa-Gambassi were responsible for sending the project Vlags along the length of the Festival (about 600m). The purpose of this project was to create a scenic setting for the entire festival and to highlight each of the flying tables that were offered to the public by all participants.

At the center of the festival was Robert Brasington. A Tasmanian who has traveled the world for many years, Robert presented his superb kites mounted in trains and his kinetic installations, real gothic wind machines.

Allessia Maroccu came from Sardinia with her family to do kite building workshops in the schools of Notre Dame de Monts. Accompanied by her parents, Ivana and Fausto, and her brother Marco, the Maroccu family has installed their sublime universe of beautiful celestial jellyfish.
The picture was very rich since shared between the fine and light creations of Alessia, those of Claudette Gosselin and the surprise arrival of Caterina Capelli, organizer of the ARTEVENTO festival in Cervia in Italy.

Awita, still well-known kite flying globetrotters! This motivated team spread out in balance with the other tables, its bestiary of giants on the south field. Facing them, the scene of the great show of flying trapeze of the Braskistant “The Tangent of the Tended Arm” which took place Saturday evening. At the end of the show, a light and colorful night flight was dressed with an octopus and a giant skate. A Switch Party was improvised with the kite flyers present for a good time of fun. A few traditional monk or classic kites have joined this night flight bringing even more colors.

On the demonstration field, teams, pairs and best drivers followed each other: GUESS, Loustiks, Adluta-Caeli, Kosmo 2 lines and 4 lines, Vice Versa, Globe Kiter …
A great surprise, great pilots in the making came to show their motivation: the Juniors of the AWITA team performed a ballet pair for our greatest pleasure.
Among the active pilots on the hot sand: Maël Chevalier, Arnaud Duhamel, Marjorie Truchet, Richard Debray, Nicolas Le Roux (called Labotte), Jean Pierre Dravigney, Seb Trek, Serge, Zorg, Tom, Alex and another pleasant surprise back : Lili, the famous green pilot of the big team 4 lines: the FLIC.
Between the performances of acrobatic ballets Jules, one of the youngest pilots of the festival, slipped. Jules made impressive demonstrations of traction sailing under the supervision of his father Zorg. Young and full of ideas, Jules let me hear that demonstrations with several “revos” would be possible soon thanks to his prototype of bar shock / border adapted to the 4 lines pilotables … To follow !!!

In the flight zone shared with the public, the kites of artists were exposed like paintings that we can finally touch and understand.

Jean Paul Richon, presented his set of Saber banners with other achievements made of cotton fabrics with colorful patterns. His giant showers have evolved and we spray lights with hundreds of metallic ribbons of all sizes.
The Vent de Folie association from Vierzon was again present with its collection of kites and banners. In direct contact with the public, they had great pleasure in communicating their passion without hindering barriers.
As a neighbor, the association Saint Brévin les Vents was flying all its arches and its bowls fabulous and well known.

On the northern ground, the associations, the enthusiasts exposed their know-how. The association Train Volant has done us the honor of two wheels of Cassagne. Turbulence had in his bags what it took to hold in the worst conditions of Monday’s earth wind. We regret the absence of Gérard and Nicole Brun, unfortunately forced to turn back on the road that led them from Switzerland to us.
Bruno Cocandeau made us happy with the installation of his magnificent turtles and flying penguins.
To remember, here are the associations that participated: Turbulence, CVCF Poitou-Charente, Kite Club Celtic, Saint Brevin Winds, Flying Train, SMKC, FFBC8, Wind of Madness.

Between Robert Brasington and the installation of the Maroccu family, I presented a variant of the Project Profile. This time there are 3 puppets that were in flight. I realized 2 configurations during the 4 days of festival. Saturday are 2 kite puppets accompanied by a Sky Dancer.
On Sunday the Dancer of Heaven waved a Poppy in his hand.

To accompany this picture of a soft undulation and some horizontal lines, I made tests with my version of the YangTze of Andreas Agren, interpretation of a kite Balinese, the “Janggan”.

Once again, the A Tout Vent Festival was organized by the Cultural Services of Notre Dame de Monts. In association with Pierre Dunoyer, I was again able to implement my ideas of staging and opening to the public. It is with great pride that I thank the municipality of Notre Dame de Monts and all the services committed to this success. A big THANK YOU to David, Charlotte and all the volunteers who took care of us during these 4 incredible days in dream weather conditions. 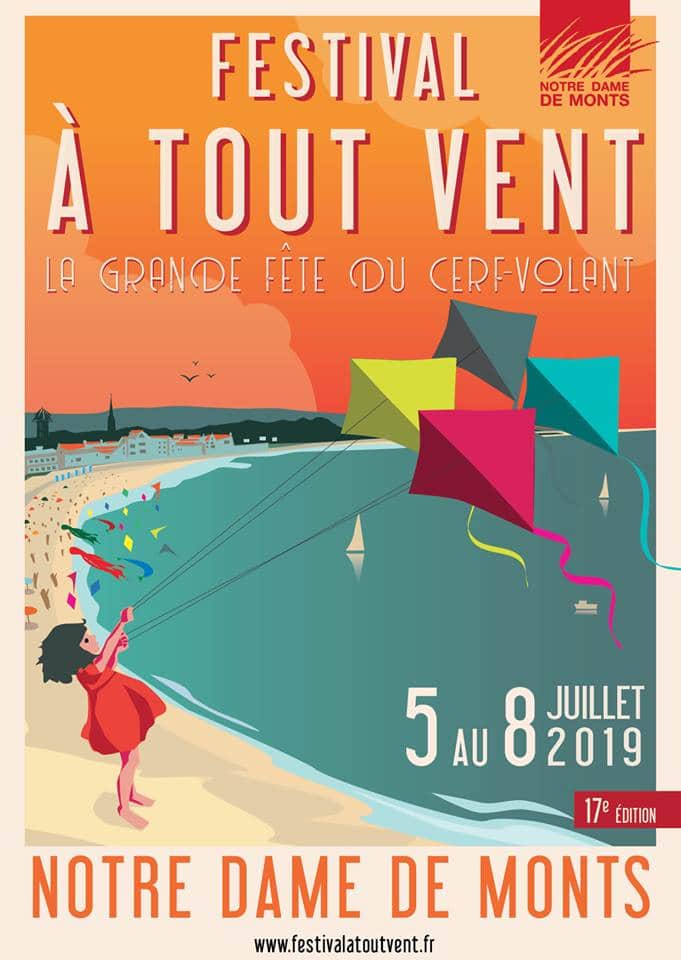 This website uses cookies to guarantee the best possible experience. By continuing your visit to this site, you accept the use of cookies. Read our privacy-policy